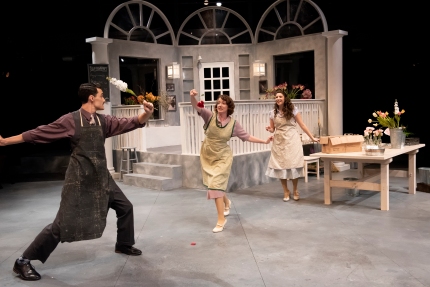 “The Day is Long to End” still by Suzanna Mars

The Day is Long to End
6 W & 7 M (Triple-casting allows for a cast of 8 actors)
A period drama about a flower shop during the rise of fascism in 1934 Vienna, Austria.
*Produced in 2018 at the University of Florida
Feature, The Alligator, July 2018
Feature, Gainesville Sun, July 2018

The Things You Tell Yourself
3 W & 2 M
A Chinese American ex-pat documentary filmmaker is in search of a subject in Mexico City. An affair with a Mexican architect leads her to Shanghai. A play about globalization.
*2019 Yellow Earth (London) shortlist

Le Jeté
Ensemble of 9 to 10 actors
A museum associate becomes an artist’s muse and struggles to forge her own identity in the art world. A play about the female gaze with Baroque opera interludes.
*2019 BAPF Semifinalist
*Conceived of in the Soho Rep W/D Lab

The Sun Experiment
2 W & 1 M
A gender-bending play set in 21st century New England, 1912 Cambridge and 17th century Illyria. Inspired by Twelfth Night and a philosophical construct by Ludwig Wittgenstein, the three eras of romance and heartbreak spin around each other in the cosmos to illustrate Wittgenstein’s philosophy.
*Produced in the 2014 New York International Fringe Festival
*Won FringeNYC award “Excellence in Playwriting”
*Featured in Time Out NY as one of the Top Ten Nightlife & Music Events in August 2014
*Conceived of in the New York Theatre Workshop Emerging Artist of Color Fellowship